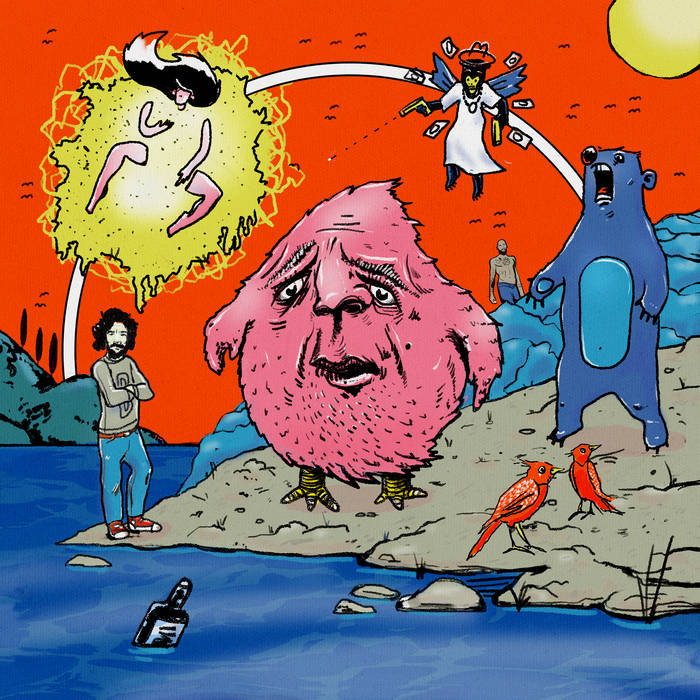 Deviant Funk I feel so much honesty in this album. Blaž is a master of story-telling with his own original blend of beats basslines and melodies. There's no production-pretense, just humour and fun ride on waves of emotion. Grateful.

"An instrumental sound called Steven is born and encounters Julia who becomes his guide. She introduces him to many of her friends, including a grizzly, a pink bird, a gangster angel and Stefan Burnett from the band Death Grips. Finally he meets Slovenian producer Blaž, who is the overseer of this particular soundscape Steven was born into. They get into a freestyle battle which Steven loses because he can't articulate words - he is only an instrumental sound after all. Steven runs away and falls into an alcohol-fueled depression. Blaž finally finds him and teaches him how to find his own articulate voice."

Blaž Gracar is a strange-hop producer from a little town called Izola on the coast of Slovenia.

Track Name: Birth Of Steven
Hello.
Welcome to this world.
You were just born right?
I’m Julia. What’s your name?
Can you say it again?
Umm, I think I’ll call you Steven.
Come with me. You must meet all of my friends.
Steven, meet Gangsta Angel.
Track Name: Memento Morje
Blaž.
There's a new guy in town. He's called Steven.
I know you are the strongest of this world.
But he's special.
Please be kind.
Track Name: Battle Of Steven
Steven, come.
You've met a lot of people in the past few minutes,
but you're nothing in this town if you don't meet Blaž.
Hello.
He is sort of the king here.
Yup.
You must battle him.
Everybody new does.
Yup.
The rules are simple:
he attacks. You fight back.

Ok, you got some skills. Let's try melodies.

Woah, ok man.
When I say "I am Blaž", you say "I am Steven".
You can do it!
I am Blaž.
No man, I am Blaž.
You have to say it.
No man, say "I am Steven".
No.
Come on say "I am Steven".
Come on!
Fuck man, say "I am Steven"!
Say it, Steven!
Man, say "I am Steven"!
Fuck!
Where are you going? Wait!
Track Name: Shame Is Death
Where is he?
Ne vem. (trans.: I don't know.)
Where is he?
Ne vem!
Go find him.
Track Name: You Were Born
Nobody asked to be born.
That’s why anybody can do whatever they feel like doing
to everything and anyone.
Chaos and anarchy are the only truth.
Kindness is at most a survival tactic and a product of evolution.
It is the only logical thing to force your power on the world
cause the world forces its power on you.
But what kind of force you represent depends on you.
And I chose my power to be music.
And you can stop me anytime.
And you can lift me anytime.
What I adopt that becomes me.
It doesn’t matter.
You were born.
Track Name: Breath Of Steven
Pičku mater, kam si se zdaj skril?
Vsa ta goščava, jebem ti sunce.
(trans.: Fuck, where did you hide?
All this jungle, shit.)

Oh, Steven.
I know.
I found a way to find your voice.
You have to go deep within.
So you have to breathe with me.
Come on, breathe!

Bandcamp Daily  your guide to the world of Bandcamp

Tasty gems from around the world, plus interviews with Kaitlyn Aurelia Smith and Nick Hakim.